Enter your travel dates now for the fastest way to see the latest hotel and holiday home deals in Kyoto.

Here is a quick summary of the type of hotels and accommodation you will find in Kyoto. If you are looking at a longer stay you can book up to 29 nights and you might want to look at the 582 hotels in Kyoto which have kitchens so eating in is an option.

There are 42 five star luxury hotels in Kyoto. There are 362 holiday homes, by definition offering unique locations and facilities. If you are looking for something eclectic, smaller or quaint there are 3 boutique hotels in Kyoto. 132 ever popular 4 star hotels for business or pleasure, and 3 star hotels providing everything for the budget conscious.

If you are visiting Kyoto for a business trip you may be interested in the 302 Kyoto hotels with conference facilities. 357 Kyoto hotels have parking. And getting to and from the airport is made easier by the 31 hotels with an airport shuttle.

A must see on your visit to Kyoto is the Kiyomizu-dera Temple which is on the UNESCO World Heritage List as a Historic Monument of Ancient Kyoto.  It is internationally recognised as a place of exceptional and universal value.  A cultural heritage site worthy of preservation for the benefit of all of mankind.
Kiyomizu-dera Temple originated in 778 when the monk Enchin enshrined an image of Kannon (the Goddess of mercy) on the mountain overlooking the Otowa-no-taki Falls.  Later in 798, the distinguished general Sakanoue no Tamuramaro built a Buddha hall there, following which Kiyomizu-dera Temple came under the official patronage of Emperor Kanmu. Destroyed many times by fire over the centuries, it was rebuilt on each occasion.
Today, the principal temple buildings are the Saimon (West Gate), the three-storied pagoda, the Kyodo (Sutra Hall), the Tamurado (Founder’s Hall), the Todorokimon (Middle Gate), the Asakurado Hall, the Hondo (Main Hall), and the Amidado (Amida Buddha Hall), all aligned on an east-west axis. Around them are other temple buildings, including the Niomon (Gate of Deva Kings), the Umatodome (Hitching Stables), the Shoro (Belfry), the Shakado (Shakyamuni Hall), the Okunoin (Innermost Temple), the Koyasunoto Pagoda, the Chinjudo, and the Jishu Shrine, wherein is enshrined the local Shinto tutelary deity.
The Hondo, built in 1633, is the central building of the temple compound and is an example of kake-zukuri or “overhang” architecture. It is famous for its so called “Kiyomizudera stage,” an imposing veranda supported by a forest of tall wooden columns with wooden braces running through them crosswise and lengthwise. The building, which consists principally of the stone-floored sanctuary (naijin), which houses the temple’s primary Buddhist statue, and the plank-floored worship hall (gejin), is characterised below by its false roof (mokoshi) underneath the main roof, by its front hisashi (a narrow, roofed area), and by its flanking wings and its stage; and above by a framework supporting a Yosemune-style hip-ridged roof of hinoki, or cypress bark. This architectural form is handed down from the Heian period (794-1184).
In addition to its buildings, the eastern part of the temple compound also contains the Joju-in Garden containing the early Edo-period technique of “borrowed scenery” (shakkei).
Another temple down the hill is Rokuharamitsuji Temple.
This temple of the Shingon sect of Japanese Buddhism was founded by the monk Kuya in 951 to embody prayers for recovery from an epidemic. The temple’s main image, the Juichimen Kannon (a National Treasure), is said to have been carved by Kuya himself. The second son of the emperor Daigo, Kuya became a Buddhist monk at a young age and is known for his practice of repeating the name of the Buddha while dancing for joy. 1
Endowed with an expansive domain in the past, the temple occupies a central place among historical sites marking the events of the rise and decline of the Minamoto and Taira clans. It was the site of the Taira clan’s palace and accommodated a local representative of the Kamakura government known as a tandai. Among the treasures housed in Rokuharamitsuji’s Homotsukan are numerous important cultural properties, including the Jizo Bodhisattva (said to be the work of the sculptor Jocho), a statue of the monk Kuya and a seated statue of Taira-no-Kiyomori.
Famous events and festivals held at the temple every year include Obukucha (January 1 to 3), Mantoe (August), and the Kuya Dancing Nembutsu, a nationally designated lmportant lntangible Folk Cultural Property known as the “Hidden Nembutsu” (December). 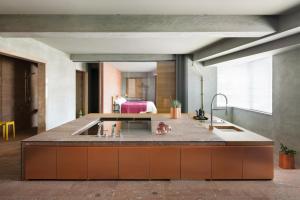 Located in Shijo area, Bijuu offers a modern and spacious self-catering accommodation with free WiFi. There are a living room with a sofa, a spa bath and a stone sauna. An on-site restaurant and cafe...more

Opened in February 2014, this luxury 5-star hotel boasts high-standard services and guestrooms that are among the most spacious in Kyoto. Guests may enjoy complimentary use of the indoor swimming pool...more

Open from February 2015, Aoi Hotel Kyoto is located a 5-minute walk from Kawaramachi Station and a 13-minute walk from Yasaka Shrine. It offers simply furnished rooms and free WiFi access.Guests can e...more 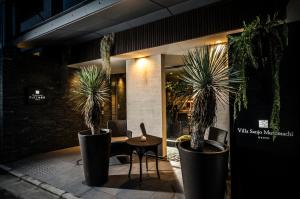 Opening in July 2016 and located within a 5-minute walk from Karasuma Oike Subway Station on the Karasuma Line and Tozai Line, Villa Sanjomuromachi KYOTO offers guests a relaxing accommodation and fre...more

Open from 2016, Four Seasons Hotel Kyoto boasts a sushi bar and a tea house by a pond in Shakusuien Japanese garden as well as a Western-style restaurant and a lounge. Kyoto Station is a 7-minute driv...more

Open from September 2017, The Celestine Kyoto Gion is set in Kyoto, a 10-minute walk from Gion-Shijo Station. Guests can walk to Kiyomizu-dera Temple in 15 minutes from the property. Free WiFi is feat...more

Awarded two pavilions by the Michelin Guide 2020, Hotel Alza Kyoto is situated near the Kamo River and within Gion District, a 2-minute walk from Sanjo Station. Some rooms feature the views of Kamo Ri...more

Offering air-conditioned rooms in the Nakagyo Ward district of Kyoto, Nagi Kyoto Shijo is 1.4 km from Kyoto International Manga Museum. Among the facilities at this property are a 24-hour front desk a...more

Daiwa Royal Hotel Grande Kyoto is located just a 5-minute walk from JR Kyoto Station. The hotel is an 18-minute walk from Tofuku-ji Temple and 2.3 km from Kiyomizu-dera Temple. This 4-star hotel offer...more

Book now and pay later rooms are subject to availabilty.

Not what you were looking for?
Try a different search here

Never miss a deal in Kyoto

Plus $25 cash back on your first booking*


Thank you! Check for emails from [email protected]
Subscribe

* Applies to bookings over $150 and you must check yes I would like to receive emails from Hotel.com.au when booking.

Never miss a deal in Kyoto

Subscribe
Thank you! Check for emails from [email protected]

Entertainment, Relaxation and Exercise at Kyoto