Located in Dalian, Shangri La Hotel Dalian is in the business district and convenient to Zhongshan Square and LaoDong Park. This 5-star hotel is within the vicinity of Dalian Forest Zoo and Dalian Jiaotong University.

Make yourself at home in one of the 563 air-conditioned rooms featuring refrigerators and minibars. Wired and wireless Internet access is complimentary, while 37-inch LCD televisions with satellite programming provide entertainment. Private bathrooms with separate bathtubs and showers feature designer toiletries and complimentary toiletries. Conveniences include phones, as well as laptop-compatible safes and desks.

Treat yourself with massages, body treatments, and facials. You're sure to appreciate the recreational amenities, including a health club, an indoor pool, and a sauna. This hotel also features complimentary wireless Internet access, concierge services, and babysitting/childcare.

Enjoy a meal at one of the hotel's dining establishments, which include 3 restaurants and a coffee shop/cafÃ©. From your room, you can also access 24-hour room service.

Featured amenities include a business center, express check-in, and complimentary newspapers in the lobby. Planning an event in Dalian? This hotel has 32292 square feet (3000 square meters) of space consisting of conference space and meeting rooms. A roundtrip airport shuttle is provided for a surcharge (available on request).

Click to write a review and share your experience of Shangri La Hotel Dalian with other travellers.

change dates to try different dates or please see the list of alternative hotels below.

When would you like to stay at Shangri La Hotel Dalian ?
Check-in
Check-out
Guests

Each day we'll check prices and send you an email for your selected dates at Shangri La Hotel Dalian. If you don't have specific dates but would like to check prices for say next weekend or say next month we can check the price too.

Please enter your email
First name
Last name
Number of adults
Number of children
How far ahead would you like to check prices and book?
7 days ahead
14 days ahead
28 days ahead
for a Weekend (Fri & Sat)
I have specific dates
Select check in date
Select check out date 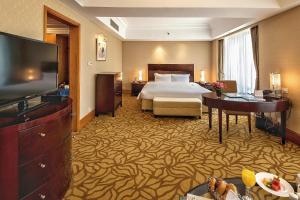 Never miss a deal in Dalian

Plus $25 cash back on your first booking*


Thank you! Check for emails from [email protected]
Subscribe

* Applies to bookings over $150 and you must check yes I would like to receive emails from Hotel.com.au when booking.

Never miss a deal in Dalian

Subscribe
Thank you! Check for emails from [email protected]
Filter